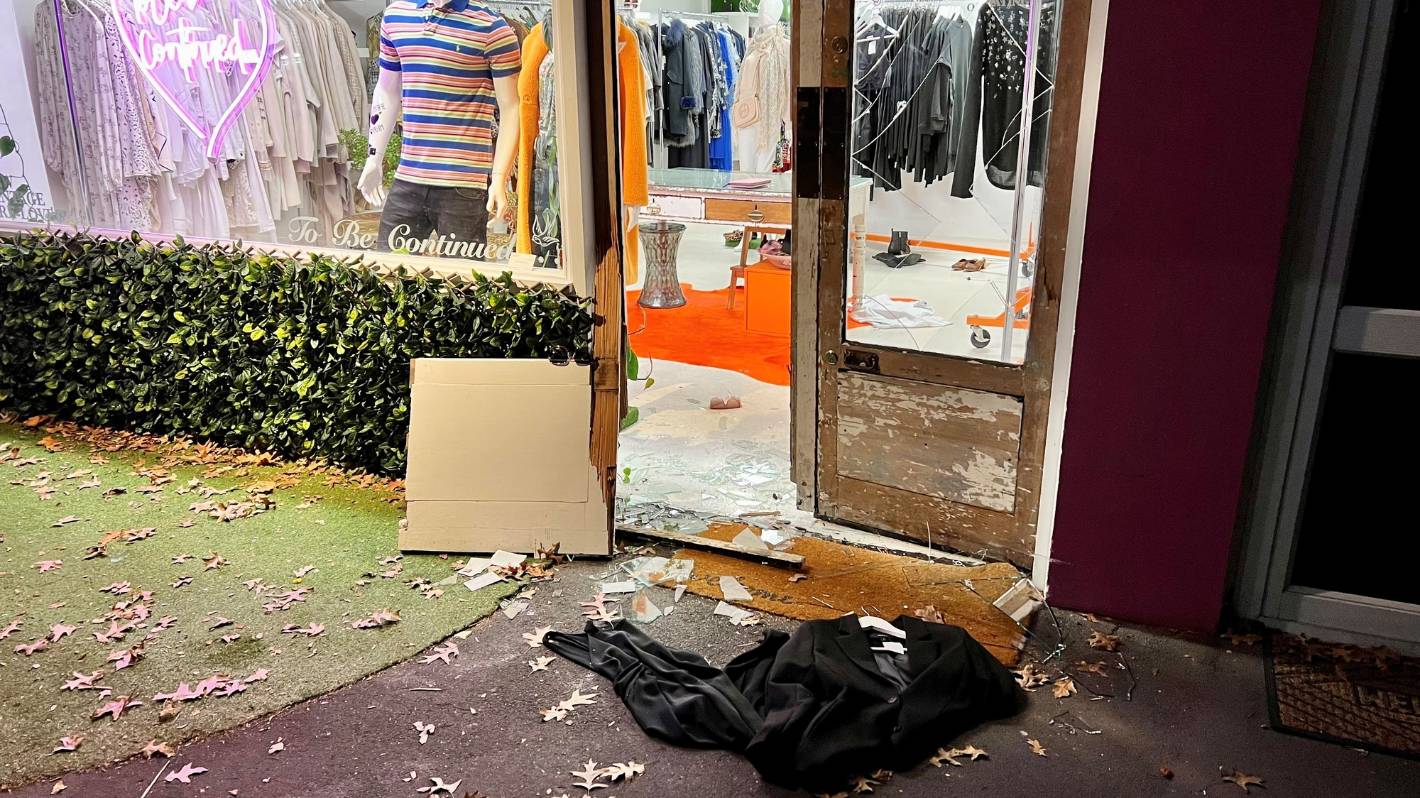 The owners of a pre-loved clothing store say it was “sickening” to watch footage of two people ramraiding their “pretty little store” that sells women’s clothes on a quiet, residential street.

Martin Exon said To Be Continued, which he owns with wife Amanda Sterling-Exon in Fendalton, Christchurch, was broken into at 5.04am on Saturday in a ramraid caught on film by security cameras.

“It’s sickening to watch. We do what we do because we love it, not because we want to be millionaires.

“We’re not a Gucci or a Prada store … to hit a pre-loved clothing store is a bit of a joke really.”

When he arrived at the store, police were there but had just missed the burglars. The two main doors were damaged beyond repair.

The store, on Bryndwr Rd, sits next to a dairy and opposite a church on a residential street. Security cameras captured the incident and an alarm system was activated immediately as the offenders struck.

A high kerb prevented direct vehicle access to the store, so the offenders instead drove on to a neighbour’s driveway and along a grass verge before ramming the main doors of the shop twice, breaking the door frame, Exon said.

He described the offenders as “big solid guys” and believed they were driving a silver Mazda Demio.

He said they got out of the car and pulled one of the doors apart to gain entry to the store, where they grabbed armfuls of stock – mainly sunglasses and jewellery from the front counter – before leaving. The whole incident was over within about 45 seconds.

Police said they were in the early stages of an investigation and no arrests had been made.

The burglary was the second ramraid incident in Christchurch in the past week.

On April 27​, two offenders in a stolen car smashed into the front entrance of Thirsty Liquor Huntsbury about 2am, but did not take anything.

There has been a spate of ramraids across the country in recent weeks, many involving youths.

Exon said he and Sterling-Exon had owned the store for five years and built up a large and loyal customer base.

The incident had left his family feeling vulnerable, he said.

“You can’t help but take it personally, and feel like you’ve been singled out.”

Amanda Sterling-Exon said the incident made her feel “violated”, but she had no plans to stop operating.

“Of course we’ll carry on.”

In a post on the store’s Facebook page, the couple told customers they were outraged about the incident.

“Absolutely f…d off… We are now another store that has been ramraided, and we are pre-loved.”